The social environment has improved, the order of all walks of life is gradually return to normal, and the fashion industry in China is also ready to recover. Local fashion week is about to be held.

Chinese clothing brands have a long history of not developing as well as Western clothing brands, but since the reform and opening up, their growth rate cannot be underestimated. From traditional clothing companies to independent designer brands, what is their current status?

With the rise of the southeast clothing manufacturing industry in the 1980s, the first batch of Chinese clothing brands came into being. The times have changed and the competition is fierce. Nowadays, every unbeatable brand will not be eliminated by the times and must keep up.

Lining, who has just finished the big show in the Dunhuang Desert, has realized the transformation from a traditional sports brand to a sports fashion brand. It hosted a catwalk at the International Fashion Week, inviting fashion stars to endorse the brand, attend the fashion show event, open a fashion flagship store, and bold cross-border cooperation. The series of actions are all changes made by this traditional sports brand to adapt into the times.

The perfect combination of professionalism and fashion, and the enthusiastic feedback has shown that this initiative has achieved good results.

As another clothing brands in the first batch, EP was dedicated to creating mid- to high-end women’s clothing with oriental beauty.

It is the 24th year since the establishment of the earliest designer brand exception in China. The founder Mao Jihong believes that “culture is the core of design”, and then founded Fangsuo Bookstore and moved the exception into the bookstore. Fangsuo is not so much a bookstore, it is more like a cultural space selling lifestyles at the same time, where exceptional brands become soulful and three-dimensional. In addition to clothing, they are closer to consumers from different angles of life.

During the epidemic, thanks to the opening of brand Micro Mall stores, Mao Jihong appeared in front of the camera of the first live broadcast festival in Guangzhou, personally communicated with consumers online, keeping up with the pace of the times.

Of course, not all marketing strategies in the new era are suitable for traditional companies. How to respond quickly and present the company’s own strengths with different marketing methods is the long-term strategy for the brand.

According to incomplete statistics, there are nearly 90 Chinese brands that published works in the four major international fashion weeks in 2018.

The development of the Internet has also brought convenience to online shopping. Chinese brands are constantly launching attacks on foreign online malls to seize overseas markets.

Beside brand’s own management, it has an invisible mission of “how to convey the beauty of the East”. This issue has been around since the birth of Chinese clothing brands. How to keep the oriental elements and develop among these brands?

Not matter its domestic or international markets, the foundation of a brand and its clear positioning are important. For example, the Yaying Group mentioned above that they know the EP’s design style and modern design are difficult to blend, so they seek intro another direction. The EP brand faces the international market, and oriental elements need to be incorporated into more modern designs.

The Edition, a mid-to-high-end women’s clothing brand under the EPO Group, directly positions the brand accurately and precisely as “GENTLEWOMEN” (female gentleman).

The wide silhouette and elegant feeling, coupled with the Chinese elements embellished in the details, create the beauty of the national style with the atmosphere. It interprets the sonorous and unrestrained side of modern China. At the same time, it portrays the portraits of independent contemporary Chinese women.

Of course, there is no shortage of young designers who express their attitudes straightforwardly in Chinese texts.

The situation of “big manufactory country, small brand country” is under reversion and rewritten by different aspects of Chinese style. In addition to the efforts of the brands established in this part of the early days, a new generation is coming.

With the rapid development of Chinese economy, the new generation with design dreams and fashion pursuits has obtained the opportunity to study in the professional art and Design College. A large number of new designers who have returned from their studies have started their entrepreneurial path. More bold and innovative independent designer brands is springing up. This is not much smoother than the entrepreneurial reform of the predecessors.

In the face of fierce competition in the market, traditional companies have a solid foundation, brands also have mature operating models with luxury goods and fast fashion, so there are no much market share left for independent designers.

While they continue work hard on creation, it is not easy for them to face plagiarism and price war from low-threshold online shopping stores. Fortunately, local fashion weeks, offline buyer stores, and theme activities on online shopping platforms are constantly giving new designers a greater platform.

In cross-border cooperation, there were cross-border gift boxes of cutting-edge designer brand MUKZIN and Maltesers before, and cross-border catwalks by CHUYI.STUDIO and Huolala. The endless creativity continuously stimulated the young market.

At the same time, it can be said that many of the “predecessors” recognized the new designer’s ability of joint cooperation, such as the joint series of designer Xia Yiqi and HanDu, and the joint series of earlier designers ANGEL CHEN and H&M, which are enough to prove the design standards of recent designers.

Designer ANGEL CHEN also won the top four in the Netflix fashion show “Next in Fashion”, once again showing the world the strength of the young generation of Chinese designers.

Among the 20 designers shortlisted in the semi-finals of the LVMH Young Fashion Designer Award this year, the name of the young designer YUHAN WANG appeared.

Most of the early independent designers in China also emerged from domestic fashion competitions. Today, these young people can confidently stand on the international arena and achieve high-profile results.

Their reach and vision are not limited to clothing. They also concerned about the close relationship between art, culture and fashion. For example, in addition to the design and development of clothing, ROARINGWILD, a local street fashion brand that has been in existence for 10 years, has also contributed to the promotion of local street culture to gather more young people with the same hobby to participate.

Compared with the predecessors, the cross-border cooperation of the new designers is more bold and avant-garde. And in terms of brands, they can quickly adapt to various marketing methods. There are also many young independent designers such as Liu Qingyang, Susan Fang, Shangguanzhe, Xander Zhou, Wang FENGCHEN, Ms. MIN, etc., who have gained the favor of many loyal fans at home and abroad. The new era brought by the new generation is better and better.

This season, Angel Chen takes inspiration from Mistress Ching, a pirate during the Qing Dynasty. The collection incorporates traditional Chinese references and sea cultures, tapping into a pirate spirit.

Vivo joined force with Angel Chen for a creative show. The technical elements of Vivo X23 were infused into the S/S 19 collection, bringing a visual feast.

Inspired by the light sensitive aesthetic of Vivo X23, fluorescent green appears on fashion clothes to reflect a rebellious style. 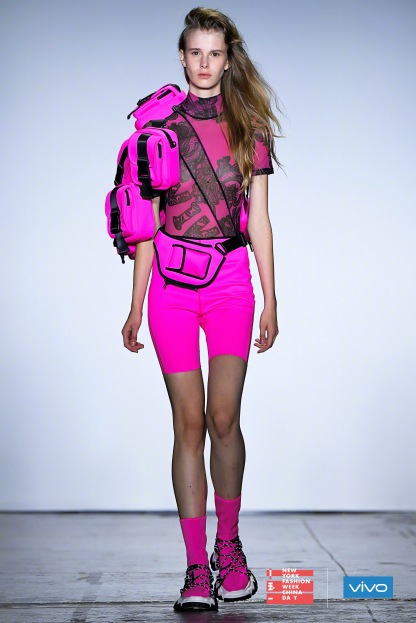 Purple is an auspicious color in China. Patterns against purple bases. The dark graphics mimic Chinese landscape paintings or tattoos of pirates. 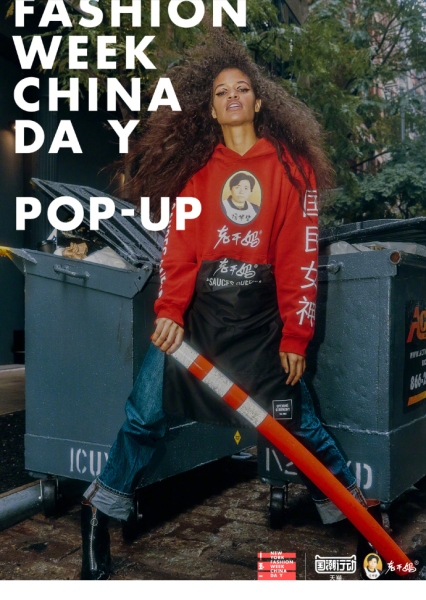 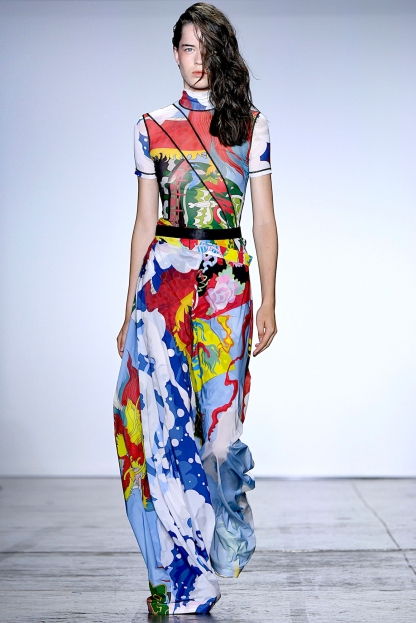 Chinese dragons and corsairs are decorated on garments in the form of treasure map. Dragons are dancing, colorful and brilliant.