On April 21st,Madrid time , the Spanish royal family went to Mallorca to celebrate Easter. They went to the majestic Palma de Mallorca (Parma) church to attend the mass. Three generations photographed the latest family portrait in front of the church. The picture was warm and beautiful. 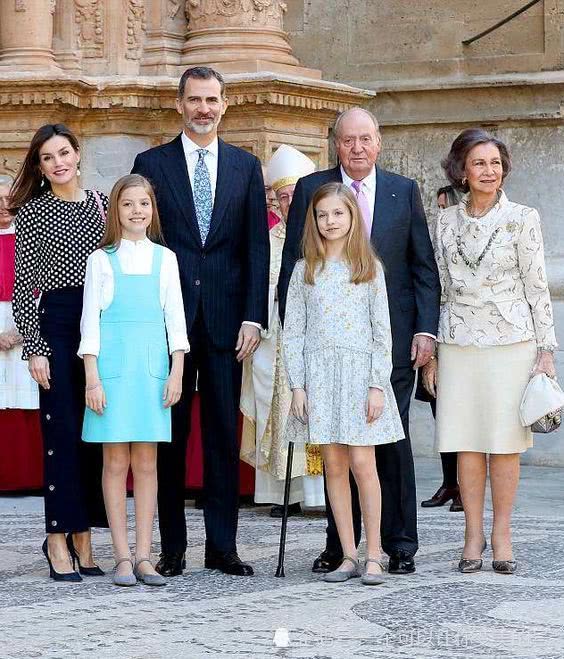 The Easter Mass of last year, the old king Juan Carlos I participated, but this year was absent. Although King Juan is only 10 months older than Queen Sophia, their physical condition is different, and Queen Sofia seems to be healthier.

The Spanish royal family always gives people a visual enjoyment. Not only it is the high value family’s, but also their dressing is very simple but exquisite, but also it is highlight their respective characteristics that called the royal version of fashion textbook.

Queen Letizia wore a dark blue printed dress in that day. The feeling of walking and winding were very good. After entering the royal family for many years, she still maintained the style of women in the workplace.

The wind of the day was a bit big, and the long hair was very attractive when the fluttering after the wind . When it was against the wind, it seemed a bit messy. Fortunately, the smile was sweet enough, and the look of the lens was amazing.

The 13-year-old Princess Leonor and the 11-year-old Princess Sofia seem to be a lot more beautiful than they were a year ago. This time they chose different styles of wear, but they still retain some similarities, all with their hair scattered, and wear dark flat ballet shoes.

The future Queen of Leon Leonor wears a small white coat with a light blue dress who is wearing a little ladylike style. It looks very elegant and pleasant. Leonor’s father, Felipe VI, has a height of 198cm, and his daughter is very petite, but it is much better to stand next to the 170cm mother.

Sister Sophia wore a short tweed top with a button on the back and dark blue trousers. The style was very fashionable and the legs looked very slender. From the same frame, Sophia is younger, but her height is higher than her sister. It is estimated that she has inherited the high gene from her father.

From the appearance of the two little princesses, Leonor is more like a mother, so who is Sophia like?

I saw the family portrait of King Felipe VI as a child. Sophia looks very much like her aunt, Princess Cristina.

On the 11th local time, the Spanish queen Letizia appeared in the village of Lerma in Burgos, she is ready to watch the “Angel” exhibition which is held in Burgos Cathedral. Letizia wears a cream coat who is easily found in a group of people.

Walking on the uneven stone road in the high-heeled shoes , Letizia walked into the royal family for many years, but she is still maintained the style of women in the workplace.

Letizia’s coat is a nightgown style. She showed them two ways to wear this coat, either by attaching a belt or opening the round neck shirt and high waist pants. Nightgown coats tend to be bloated after being attached to the belt, but this problem is not obvious for people with slim bodies. 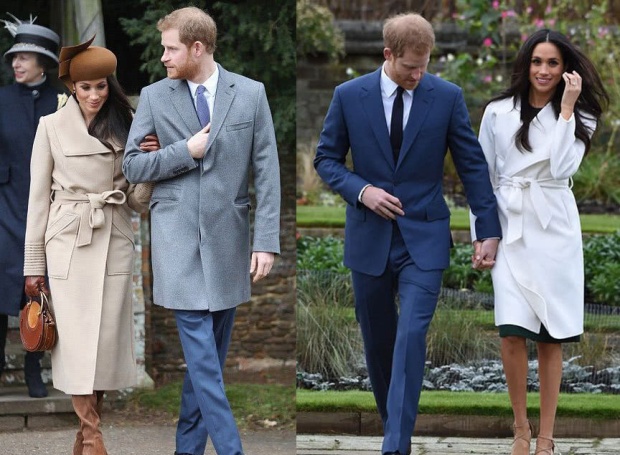 When it comes to nightgown coats, it’s hard to think of the British Duchess of Sussex Meghan. When she first appeared as the fiancée of Prince Harry, she wore a white robe coat at Christmas. Also it is puts on a camel. I don’t know if the fabric is too thick. Anyway, Megan is a bit cumbersome to wear, and it is inferior to Letizia in terms of cleanliness and beauty. 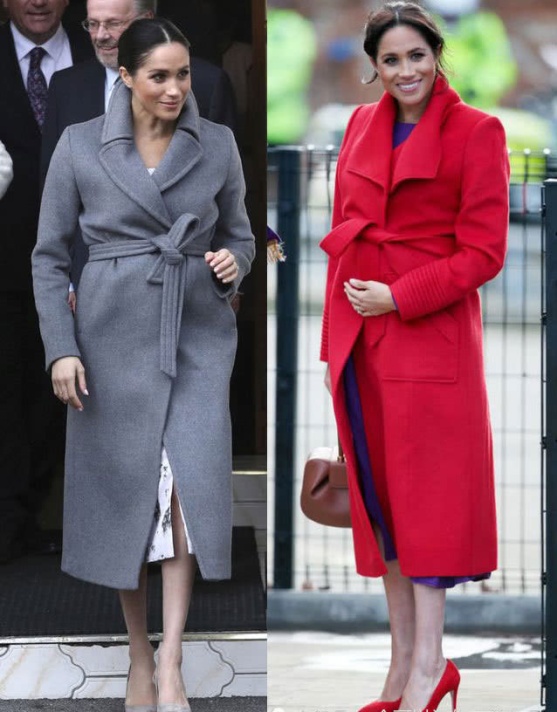 After the pregnancy, Megan was still not give up the nightgown coat, but the protruding pregnant belly directly turned the coat into a nightgown for warmth in the morning, lazy is there, but the temperament should not be thought. Megan is also reminded everyone that if the waist is not slender, don’t wear a nightgown coat.

Letizia is looking at the exhibition, whether it is a look or a standing who gives a feeling of fullness. At 46, she looks tall and very energetic.

In the past few days, the Spanish Queen Letizia and her husband Felipe began a three-day state visit to Argentina. The Queen of Spain has always been known for its high-grade clothes. This time, it is still beautiful. Enthusiastic! Letizia came to Buenos Aires and the first lady of Argentina was in the same frame who two were so beautiful. 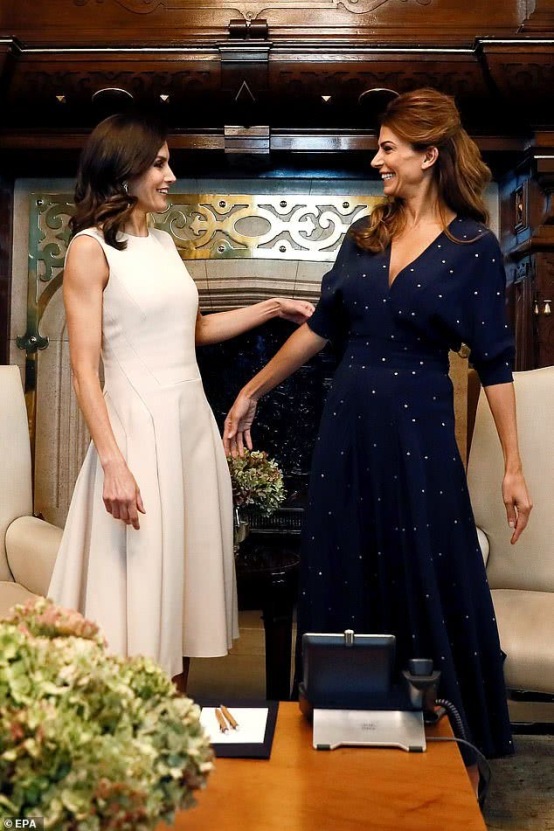 The 46-year-old Letizia and the 44-year-old Argentine First Lady Juliana Awada are dressed in elegant dresses under the knees. Letizia’s nude pink sleeveless dress is full of girls feelings, Fluffy hairstyle looks very elegant. Perhaps speaking of the European royal family, everyone is familiar with the British royal family Megan and Kate, but I prefer the elegance and low-key Queen of Spain. This cherry blossom skirt is very age-reducing, and the design of the waist just highlights the curvaceous beauty of Letizia. 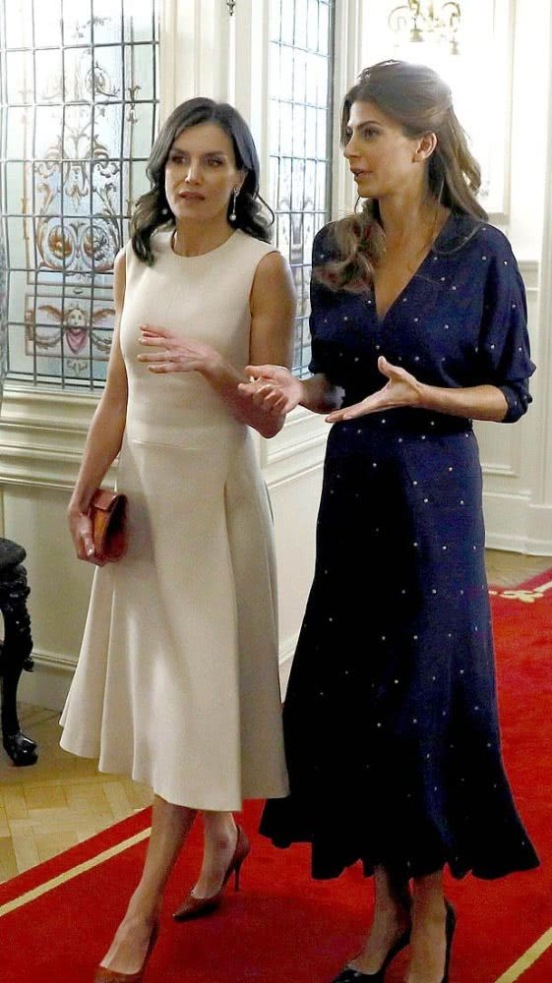 The pleat design of the hem is full of design, and in order to balance the nude color dress in the day, the Queen of Spain is paired with a pair of red high heels that enhance the color. The nude pink and red collide each other which is both low-key and very worthy of attention. The bag on the hand echoes the color of the shoe, and the Queen of Spain always reflects her high-grade clothing in various details.

The first lady, Juliana Awada, is also very extra-pointed, and Letizia’s curly hair style is not the same as usual. The wave is more curled and more charming! Originally as the female anchor of Spain, the counterattack was married to the Spanish royal family, and the second marriage was still became a big winner in life. 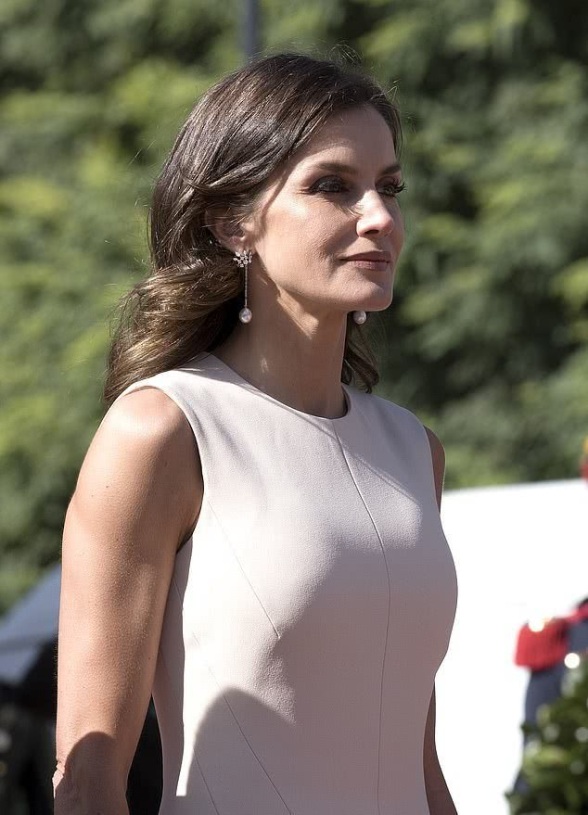 The Queen of Spain is now 46 years old, and this figure looks like 30 years old! Born with two little princesses, she has always been a dressing template for Spanish girls. Not to pursue too expensive clothes, it is such a simple shape, which highlights the inner peace and noble feeling! This nude pink dress comes from the brand Pedro del Hierro and it is also a Spanish brand. Letizia is really the king of the powerful Spanish brands! The skirt from the spring and summer of the 19th series, it is very line-cut, does not seem to grab the limelight, but it is full of advanced! 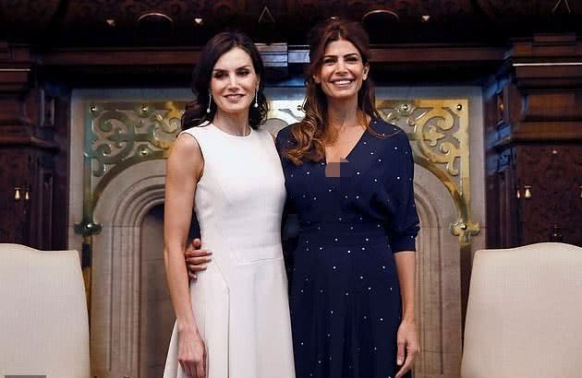 The Queen of Spain and the first lady of Argentina took a close photo. Liana chose a navy blue dress with silver spots on it. The design of the sleeves is also very suitable for the occasion. In fact, we also wear from the two. You can learn a lot, the skirt is really a must-have item for formal occasions, and if you want to wear this color, you have to rely on some details to build!

But this time, Letizia’s skirt has a shortcoming, that is, the waistline is too low, it seems to have some five points. If the waistline of skirt can be raised, it will be more perfect!

The four people took a photo with the picturesque poster! The height of this king of Spain is so high, where is the way to grab the limelight! Do you think that the Queen of Spain meets the first lady of Argentina, who is better? I can’t compare it.

The Queen of Spain and the First Lady of Argentina are in the same frame, and the cherry blossom skirt is too charming to hit the polka-dot skirt.